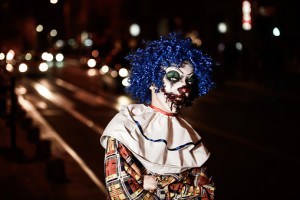 Clown sightings are being reported in several places from the mid-Atlantic to the Southern United States. People are getting “creeped out” about it, and local police do not find it funny. Antioch and Glencliff high schools were placed in lock down in September after a reported clown threat. Four people were cited in Portland after playing a prank while wearing clown masks, and in Coffee County a man was arrested on a stalking charge after authorities say he called 911 claiming to be the clown that had been threatening children, according to the Tennesseean.

Halloween is drawing near, and as it happens every year, there will be people dressing up in costumes to have some fun, and that is just fine. The problem occurs when people disguise themselves as creepy clowns, prey on a common fear of clowns and terrify people. Rami Nader, a psychologist who studies coulrophobia, the irrational fear of clowns, believes that the fear of clowns is fueled by the fact that clowns wear makeup and disguises which hide their true identity and feelings, according to a story on CNN.com. The creepy clown pranksters are just taking advantage of many people’s natural distrust and fear of clowns. People dressed as clowns have been banging on the windows of passing vehicles which is alarming to the local police. While it is not by any means against the law to run around in a clown costume and have a little bit of fun, it is against the law to stalk, harass or threaten people and destroy property.

What can be considered criminal mischief in Tennessee?

While the charge of criminal mischief sounds trivial, it can have serious consequences. These people who dress up as clowns and go prowling around looking for trouble can end up facing charges such as criminal mischief or vandalism when their shenanigans get out of hand and they end up causing actual property damage. In Tennessee, vandalism is punished as a theft crime and the severity of the sentence if convicted depends on the valued of the property that was destroyed. If the value of the property is $500 or less it may be charged as a Class A misdemeanor with up to a year in jail and $2,500 in fines, but if the property’s value is between $10,000 up to more than $60,000 the penalty could be a Class B felony with 8-30 years in prison and up to $25,000 in fines. Depending on the nature of the offense, the defendant might also be required to pay restitution to the victim.

Have you run into trouble with the law after participating in what you thought was harmless shenanigans with your friends? Has your child been charged with criminal mischief? If you have been charged with a crime in Franklin, Columbia or Brentwood, you will need an aggressive Franklin criminal defense attorney to assert and protect your rights. One foolish mistake does not have to ruin your life. You are welcome to contact the Law Offices of Adrian H. Altshuler & Associates today, or call 615-977-9370 to schedule an appointment right now. We also have offices in Brentwood and Columbia to serve you.