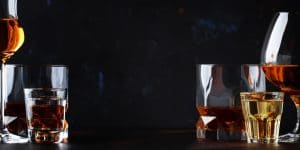 Many people think that different drinks affect people’s emotions differently. They’re certain that beer makes them feel differently than wine, and that wine shouldn’t affect them the same way bourbon does. The starting point for this question is that generally there is no difference in the amount of ethanol in standard drinks, which means a person’s reaction times and other responses should, typically, be the same from one standard drink to the next. What is different is usually just the drinker’s perceptions and emotional responses to the drinks.

According to BAC Track, “The National Institutes of Health implemented the ‘standard drink’ in order to help people understand that while drinks are different sizes, they contain the same amount of ‘pure’ alcohol.” Standard alcoholic drinks include:

The alcohol in each drink is the same. It’s ethanol also called ethyl alcohol. The ethanol content in all these standard drinks is about 14 grams.

Most scientific studies focus on the effects of alcohol on the brain and the body. There aren’t, according BAC Track, that many studies on how different types of drinks affect the body differently.

Behavioral differences and other factors

Often, drinking is affected by one’s surroundings. An event such as a football game may call for beer, a fine dinner may call for wine, and parties may call for mixed drinks and shots of liquor.

The different effect on people are often based on how the drinks are consumed and the speed with which they are consumed. Downing some shots of tequila quickly may affect the perception of intoxication differently than casually drinking a few beers during the course of sporting event. In short, the reactions to what people drink often vary based on what’s in someone’s head and not their biological responses:

Researchers from Northern Kentucky University found that mixing alcohol with diet beverages actually increases blood alcohol concentration with a breathalyzer compared to the regular sugar-based beverage. Researchers explain the effects of alcohol are mitigated if consumed with nutrients like sugar because it slows the entry of alcohol into the small intestine, where it is absorbed by the body.

Congeners’ effects on the body

Congeners are believed to have some effect on the body. “Congeners are the chemical impurities that are produced as byproducts of the fermentation and distillation process.” Congeners affect the color of the drink, its smell, and its taste. The amount of congeners does vary from drink to drink. More expensive brands of alcohol tend to have fewer congeners than cheaper brands because there’s a more thorough distilling process in more expensive alcohol products. BACTrack states that it’s hard to study congeners because there are so many different variations. To the extent different drinks cause different bodily reactions which may contribute to a DUI, congeners are believed to be a contributing factor.

At the Law Offices of Adrian H. Altshuler & Associates, we fight to have DUI charges dismissed because the police didn’t have grounds to stop you, the breathalyzer tests and field tests were invalid, and for other legal and factual reasons. We also work to negotiate plea agreements where possible and acquittals if your case goes before a jury. For help with any first-time or subsequent DUI charge, call our DUI criminal defense lawyers at 615-977-9370 or complete our contact form to schedule an appointment. We defend clients accused of crimes in and around Franklin, Columbia and Brentwood Tennessee.