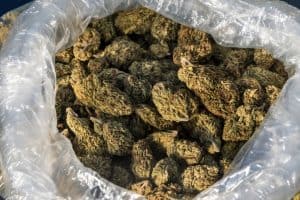 It is common knowledge that marijuana is illegal in Tennessee, as well as a federally prohibited Schedule I substance. It’s also well known that many Tennesseans smoke or grow marijuana, and that this doesn’t necessarily make them hardened criminals. Decriminalization efforts in Nashville and Memphis have been getting traction since late last year, but the state does not yet even recognize medicinal properties of marijuana or cannabis.

Jorge Gusman was recently driving through Dickson County, hauling a second car on a trailer, when he was stopped on Interstate 40. As law enforcement officers were running his VIN after noting that he was showing signs of anxiety and distress, the driver of the vehicle fled the car. After chasing him a short way, Gusman was apprehended. Troopers found almost 700 pounds of marijuana after Gusman consented to a search of his vehicle.

There are five types of drug crimes in the state of Tennessee:

The type of penalty you can incur for conviction of a drug offense will vary based on your criminal history, the schedule classification of the drug (marijuana is Schedule IV in Tennessee), and the quantity of the substance involved in your charge.

While marijuana possession charges are often viewed as less serious offenses than trafficking and conspiracy, being arrested for possession of any drug can be stressful, expensive, and time consuming. In many cases, you will be taken to jail for at least some period of time. An aggressive Tennessee drug crime lawyer will advocate for you in the courtroom, and will know the ins and outs of the law. You should have an understanding of plea deals and what’s available to you when you consult with your attorney.

Drug trafficking charges, on the other hand, can change the course of your life. If you were arrested within a certain radius of a playground or public school, your sentences may be harsher than normal. There are federal mandatory minimums for trafficking and conspiracy convictions, and Tennessee state guidelines, as well. If you or a loved one has been arrested for drug trafficking, call a dedicated Franklin drug crime attorney without delay.

When you have been charged with any drug crime, you will need an aggressive and reputable lawyer to  fight for your rights. At the Law Offices of Adrian H. Altshuler & Associates, our dedicated Franklin drug crime attorneys want to help you make sense of your charges and options for pleas. We meet with clients in and around Franklin, Brentwood or Columbia. Call us today at 615-977-9370 or contact us online.