What Makes a Prenuptial Agreement Invalid?

What Makes a Prenuptial Agreement Invalid? 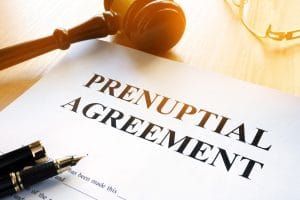 In fact, there are a few ways a prenuptial agreement can be invalidated or nullified. Today, we’re going to talk about when and why that can happen.

When can a prenuptial agreement can be deemed “not enforceable?”

For prenuptial agreements to be deemed enforceable, they must be done right. Timing is very important. Because it can take weeks or even months for both partners to come to an agreement about all the conditions, it is imperative that both partners receive the prenup in enough time to go over all stipulations. Prenuptial agreements can be deemed invalid if a prospective spouse has not had enough time to review the document. A prospective spouse must be given an adequate amount of time to look over the prenuptial agreement before signing it.

If a prospective spouse is coerced or pressured into signing a prenup, the agreement can be deemed invalid. It doesn’t matter if the pressure comes from the fiancé/fiancée, a family member, an attorney, or any other third party: coercion is not allowed, and a prenuptial agreement can be “throw out” if the judge believes one party was coerced into signing.

Do people really spring prenups on each other?

Based on our experiences? No, last-minute prenups aren’t all that common. Most couples discuss them first. What does sometimes happen, though, is one party is nervous about asking the other party to sign the agreement, and so he or she will wait until the last possible minute. In cases like these, the agreements are rarely drawn up in time. Instead, the couple may choose to draft a post-nuptial agreement. Post-nups are like prenups in that they cover the same exact things – asset division, charitable giving, trust funds, etc. – except they’re signed after a couple has tied the knot.

There are some cases, however, where one party may assume the other party knows he or she will request a prenup. For example, if one person brings significant, substantial assets to a marriage, like real estate or a business, a prenuptial agreement makes sense – but that person still needs to tell his or her beloved that the agreement will b drafted, and give his or her betrothed time to review it.

What are other ways to invalidate a prenup?

Aside from coercion, there are a few other ways a prenuptial agreement can be invalidated.

The spouse who signed the prenup was not aware at the time of the assets, and as a result, was not aware of what he or she was potentially giving up. While it is not necessary to give a detailed description of each asset, both parties should be aware of what assets are available.

A prenup agreement will still be deemed enforceable even if one or both parties made a small mistake concerning the contract. The courts will try to decipher both parties’ conditions from the documents and the testimonies and honor those conditions. If there is a serious mistake that cannot be resolved by a judge, the prenup may be deemed invalid. In cases where one or both spouses failed to understand the conditions of the prenup, the court may deem the prenup invalid.

Prenuptial agreements can be invalidated if the terms are so unfair and one-sided that the court would question why the spouse would agree to the agreement in the first place. Some examples of one-sided conditions involve a spouse maintaining control of all assets before and after the marriage while the other spouse receives no equitable division of property. These types of agreements would be deemed “unconscionable” by the courts, causing the prenup agreement to be invalid.

Prospective spouses who are offered prenups at the last minute by their partners should not sign the agreement. Instead, it would be beneficial to contact a family law attorney to help review the agreement before signing. The attorney can help the prospective spouse with understanding and interpreting the many conditions of a prenuptial agreement in each state.

Tennesseans rely on the Law Offices of Adrian H. Altshuler & Associates to protect their interests through family law and estate cases. The firm does everything possible to pursue justice aggressively on their behalf. Our family law attorneys can do the same for you. Call a trusted family lawyer in Franklin, Brentwood, or Columbia today at 615-977-9370, or complete a contact form to schedule a consultation.