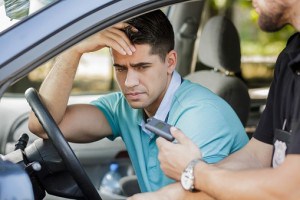 In August 2016, a group of engineers at the University of California San Diego came up with a sensor that you can wear on your skin that is capable of measuring a person’s blood alcohol level from their sweat. This small skin patch then transmits that information wirelessly to a smartphone, laptop or even an ignition interlock device. The device is designed to provide continuous, real-time monitoring of blood-alcohol content in a way that is accurate and non-invasive.

The device is a temporary tattoo which adheres to the skin and emits a chemical that causes the skin to sweat. The device then measures the blood-alcohol content in the sweat, in real time, and then a flexible electronic circuit board which attaches magnetically to the tattoo communicates the information using a Bluetooth signal within 15 minutes of the reading. The team is now working to develop a device that will monitor blood alcohol levels continuously for 24 hours.

Joseph Wang, an electrical engineering professor at UC San Diego led the team that developed the device. Wang said that the device can be used to transmit blood alcohol level to the person’s smartphone to prevent them from getting behind the wheel after they have had too much to drink. It can also be integrated with a vehicle’s ignition interlock device

The legal limit for blood alcohol concentration (BAC) in Tennessee and in most states is .08 or higher for drivers who are legal age. By now it is a foregone conclusion that every driver knows that it is against the law to drink and drive, so when a drunk driver causes a crash that results in injury and death it is especially troubling to know that all of that devastation could have been avoided. The CDC reports that there were 3,423 people killed in traffic crashes that involved a drink driver in Tennessee between 2003 and 2012. About one in three traffic deaths in the United States involves a drunk driver, and although the rate of fatal drunk driving crashes is declining in recent years, drunk drivers continue to get behind the wheel and drive despite being impaired by too much alcohol.

Tennessee is known for its aggressive stance against drunk driving. There are no-refusal sobriety checkpoints, and since 2013, all DUI offenders are required to install an ignition interlock device. Despite this aggressive enforcement, there are 59,208 3rd time DUI offenders and a mind-blowing 17,342 5th time DUI offenders. That means that there are more than 17,000 people in Tennessee who have been convicted of DUI four time, yet they still chose to get behind the wheel after having drank too much alcohol and were convicted a fifth time according to Mothers Against Drunk Driving (MADD). It seems apparent that there are some drivers who are completely out of control when it comes to driving after drinking too much. Hopefully, devices such as this breathalyzer skin patch will be able to alert drinkers that they have had too much to drink and then the signal would disable the ignition in their vehicle so that it will not start until their BAC is below the legal limit.

If you are facing DUI charges in Tennessee, you might benefit from working with one of our competent, Franklin DUI attorneys from the Law Offices of Adrian H. Altshuler & Associates. We answer your questions about your charges and advise you of your rights based on the circumstances of your case. Contact us today and schedule a consultation right away, or call 615-977-9370 to find out more.