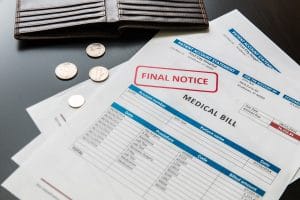 Medical debt in Tennessee is generally treated under the equitable division guidelines of the state. In short, this means that bills acquired before the spouses were married are the responsibility of the individual spouses. If a wife has a medical bill for treatments for the flu that she incurred before the marriage, then she is responsible for the bills in her name. If a husband treats with a pain management doctor after the spouses file for divorce, then the husband is responsible for his pain management bill.

Medical expenses incurred by either spouse that arose during the marriage are the responsibility of both spouses, and the duty to pay the medical bills will be apportioned in accordance with the equitable division rules of Tennessee. For example, if a mother has bills for the pregnancy of a child who was born during the marriage, then it’s only fair that both spouses should be responsible for the delivery room and obstetrician bills. If either spouse breaks an arm or needs any medical treatment during the marriage, then both spouses are generally liable for the orthopedic bills even though only one spouse was injured.

Just as the property is divided according to equitable division principles, the debts of the spouses are divided in the same way. Courts review the following factors when it comes to deciding which spouse gets which assets and which spouse is responsible for all marital debts including medical bills:

Exceptions to the rule regarding debts

If you and your spouse took out a loan together, or consolidated your debt to pay one monthly sum, then you are both responsible for that debt. You may also face equitable distribution of those debts if you use a joint account to pay off the bills, regardless of who’s name is on the bills. If you’re unsure about who will have to pay, ask your divorce lawyer; he or she can help you understand the breakdown.

An additional consideration is the rights of creditors. Creditors generally can only file a claim against the people who are responsible for the services. In medical debt cases, this typically means the person who received the medical treatment. If a creditor files a claim against one spouse, then that spouse (depending on the final equitable distribution decision) can then turn around and demand payment from the other spouse. Ideally, the medical debts and other debts (with the possible exception of the mortgage) are paid immediately after the divorce.

Generally, any medical bills occurred for children during the marriage are considered marital debt and the responsibility for these bills is determined by the equitable division laws of Tennessee.

After the divorce, the responsibility for the medical bills of the children is determined by a child support order. The starting point should be to include the children on the insurance policy of the parent who has the better coverage. Any medical debts for children that are not covered by insurance should be clearly resolved in the support order.

At the Law Offices of Adrian H. Altshuler & Associates, we detail all your bills, expenses, assets, and income to arrive at the best solution for a spouse going through a divorce. This includes determining which debts are marital debts and which ones aren’t, and who should be responsible for the debts. For help with all phases and parts of your divorce claim, call us at 615-977-9370 or complete our contact form to schedule an appointment. Our offices are in Franklin, Columbia and Brentwood.