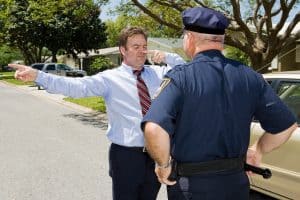 Any driver who is stopped on suspicion of driving while intoxicated will likely be asked by the police officer to submit to field sobriety tests. If the driver fails the field tests, the officer will then usually ask the driver to submit to chemical breath or blood tests.

There are three standardized tests that officers usually give. These tests, approved by the National Highway Traffic Safety Administration, are

The police officer has a checklist of things he/she is looking for to see if the driver is likely impaired by alcohol or drugs.

Other tests that have been used historically

In the past, before the three NHTSA field sobriety tests became standard, officers tried other tests. Some officers, depending on the circumstances of the stop, may even ask the driver to submit to these tests today.

As with the standard tests, the driver can refuse to submit to the field sobriety tests, though the officer does not have to tell the driver that the driver can refuse to submit to the tests. Just because you refuse to take the test doesn’t mean you won’t be arrested for drunk driving. If for example, you were driving the wrong way on a one-way street, the officer smelled alcohol on your breath, your answers are unresponsive, and you were visibly tired at the time of the stop; the officer could arrest you for DUI.

Some old field sobriety tests an officer may try include:

These tests are non-standard because while they tend to show the driver has a mental or physical impairment, they don’t necessarily indicate the driver was intoxicated or under the influence of drugs. If a driver is asked to perform one of these nonstandard tests and fails, experienced Tennessee DUI attorneys will challenge the validity of the tests. On the other hand, if you pass one of these tests, the police officer may choose not to arrest you.

The Franklin DUI defense lawyers at the Law Offices of Adrian H. Altshuler & Associates fight aggressively for anyone charged with a DUI offense. We work to suppress illegally obtained evidence and to show the police officer did not follow the law. If you were charged with a crime, your liberty, reputation, and finances are in jeopardy. The experienced Franklin, Columbia, and Brentwood defense lawyers have the experience to try cases before juries, negotiate plea bargains, and seek dismissals. For help now, please phone us at 615-977-9370 or schedule an appointment by filling out our contact form.