Man Charged with DUI Claims His Dog Was the Real Driver

Man Charged with DUI Claims His Dog Was the Real Driver 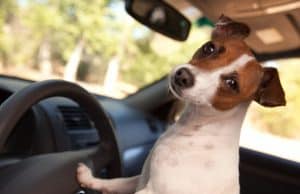 The Orlando Sentinel reported that a Florida man has come up with a new excuse for driving while intoxicated – it wasn’t really him driving, it was his dog. Alas, the excuse didn’t pan out and the driver now finds himself in the proverbial doghouse.

The man was arrested and charged with driving under the influence after he drove his car into several ditches and then struck a house. The report of the arrest was filed by the sheriff’s office in Manatee County, Florida. The driver was observed speeding and running through a stop-sign. The officer then observed the driver fail to navigate a turn causing it run into a ditch. The driver was able to continue driving until he struck a second ditch, which careened him into a home.

The driver didn’t stop, though. He fled to escape the police by hurling fences and running through people’s properties. He tried to hide in a church. Members of the church alerted the officers to the driver’s location. With the help of the church members, the officers were able to arrest the driver.

The driver then failed to observe the “golden rule” of arrest – keep quiet, except to ask for a lawyer. Instead he said that his dog was the driver and that he was running because he just wanted to run. The officer’s report noted that the driver smelled of alcohol and marijuana. Adding to the example of what not to do when you’re arrested, the driver dared the officers to search his car. When he began throwing up and experiencing pain, the police took him to a local hospital.

The defendant was charged with DUI, causing damage to property, resisting arrest, and leaving a collision site when there was evidence of property damage.

Police did note that no dog was found at the accident site. The article indicated that the defendant had multiple prior arrests but said it was not certain that the driver had a canine accomplice for any of those arrests either.

Steps to take if arrested for a DUI

This particular man gave a Master Class in “What Not to Do When Arrested for DUI.” If you are pulled over or arrested for suspicion of driving under the influence of drugs or alcohol, you:

Understand that if you are pulled over for a DUI and deny the tests, that refusal can cause your license to be suspended. Still, this is a better alternative to getting a DUI.

At the Law Offices of Adrian H. Altshuler & Associates, our criminal defense lawyers have been fighting for the accused since 1991. Our team of strong advocates asserts every defense available to help get the charges dismissed. We’re ready to try cases before a jury. We also often can negotiate plea agreements. To understand your rights and what defenses apply, please call us at 615-977-9370 or complete our contact form to schedule an appointment. We represent defendants charged with most types of criminal offenses – in Franklin, Columbia, Brentwood, and across Tennessee.