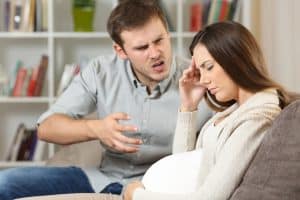 Emotional abuse can be hard to recognize for several reasons. Often, the abuser is nice and loving for much of the day, and the natural tendency of many people is to focus on what’s working instead of what’s not. If you haven’t had healthy relationships, you may take emotional abuse as part of your norm – when you shouldn’t. Some emotional abusers are actually quite adept at making the victim of the abuse feel guilty – that they deserve the abuse. You DO NOT deserve emotional mistreatment by a spouse or partner.

The dangers of emotional abuse

Emotional abuse can cause anxiety, depression, decreased sexual desire, and post-traumatic stress disorder. You may even feel physically ill even though you haven’t been physically assaulted.

Many people who fail to stop emotional abuse in its tracks have a history of abuse in their family background.

Signs of emotional abuse include:

Signs of direct verbal abuse include:

Sarcasm and jokes may seem innocent but these too are often meant to hurt you.

How to confront abuse

Generally, responding to the content of the abuse is what the abuser wants. Denying the accusations and explaining your arguments is normally not productive. Simply walking away, or politely requesting that he or she not speak to you in such a way, might be better responses.

Often, speaking with psychologists and other trained professionals can help, if you can afford it. Many communities have self-help groups and nonprofit therapy organizations that can also help.

The main keys are to recognize the abuse, know that you need to respond, and working with family, friends, and others to craft an appropriate response.

If the abuse doesn’t stop, then it may be time to consult with a family lawyer.

When abuse of any type occurs, seek immediate help

Every spouse has the right to feel secure and safe. If a spouse is hitting your, making you feel terrible or guilty, or creating unhappiness – it’s often time to speak with a lawyer. A respected attorney will review when counseling may help. The lawyer may pursue immediate protective orders to keep you safe. When it’s clear the marriage is over, experienced Franklin divorce lawyers help protect your financial future and your ability to move forward. If there are children, the best interests of the children will be a priority.

At the Law Offices if Adrian H. Altshuler & Associates, our attorneys are ready to handle every phase of your divorce. We represent spouses and parents who reside in Columbia, Franklin, Brentwood and the surrounding areas. For help now, please call 615-977-9370, or fill out our contact form.