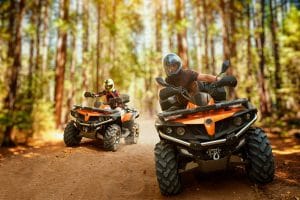 Many people love riding their all-terrain vehicles (ATVs). They offer a super fun way to enjoy recreation, especially during the warm months of the year. These vehicles are not permitted to share the same space with cars, SUVs, and trucks on regular roads and highways. However, you do need a driver’s license just as any other type of motor vehicle if you want to drive them legally. In addition, anyone driving an ATV while under the influence of alcohol may be charged with a DUI. If the impaired driver of an ATV has an accident, serious penalties are possible, including fines and jail time.

In the state of Tennessee, ATVs are permitted to be driven in areas such as hiking trails, forest areas, and certain parks that allow them, in addition to recreational areas. These are all public areas and ATV drivers are expected to follow all necessary safety protocol for the protection of everyone on these trails, including bicyclists and pedestrians.

Driving under the influence constitutes reckless driving and puts not only oneself in danger but also many other individuals in the same vicinity. If you intend to operate any ATV in Tennessee, the vehicle must be registered and also have license plates before it can be legally driven. Therefore, the same punishments apply to ATV drivers as drivers of standard motor vehicles for the following DUI offenses:

If an ATV operator causes an accident and the operator is under the influence, the driver is considered legally at fault. There are other potential consequences involved with a DUI conviction, including paying property damage and medical bills to any injured parties.

Driving any type of off-road vehicle, including an ATV may seem like a much easier task than driving a standard motor vehicle. However, the dangers are very similar when it comes to driving under the influence of alcohol

If you or someone you love or no is up against DUI charges while operating an ATV, a strong and experienced legal advocate can help you build the defense you need to achieve the best possible outcome in your case. Our experienced Franklin DUI attorneys at the Law Offices of Adrian H. Altshuler & Associates, we can review your case and fight hard to achieve the best possible outcome for you. To set up a consultation, give our office a call today at 615.977.9370 or fill out our contact form. We are here to represent injured clients in Columbia, Franklin, and Brentwood Tennessee.