The Pros and Cons of a Plea Bargain

The Pros and Cons of a Plea Bargain 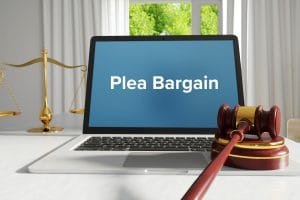 Experienced criminal defense lawyers work aggressively to obtain dismissals of criminal charges and to suppress evidence that was illegally obtained or is improper. They should always be ready to try your case in court before a jury. Many times, though, lawyers work with the prosecutor to arrange a plea bargain. A plea bargain essentially means that the prosecution either agrees to drop more serious charges, to replace more serious charges with less serious charges, or agrees to a sentencing recommendation.

When will a plea bargain be offered?

In most cases, the plea bargain discussion takes place later in the criminal process. If your lawyer can suppress all of the evidence, he will seek a dismissal. If only some of the evidence is suppressed, that strengthens your ability to negotiate a plea bargain.

After the preliminary hearing, the suppression motions, and the discovery requests, you’re in a better position to evaluate who will testify against you and what they might say.

As your case nears a trial date, the prosecution may have other cases that have higher priority for them – which can also strengthen your position.

A key factor in plea bargain negotiations is understanding which judge is assigned to your case. Some judges are more favorable towards defendants than other judges.

Why should I consider a plea bargain?

Some of the advantages of plea bargain include:

Jails are rough places. Plea bargains can help you get out of jail quicker or stay out of jail altogether.

What are the disadvantages to a plea bargain?

Some of the reasons defendants should not consider a plea bargain are: