Is a Divorce Affecting Your Work Performance? 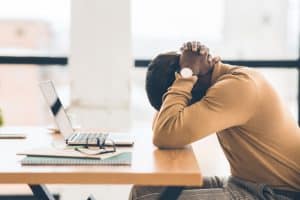 A divorce is a major life event. Whenever divorce is mentioned, the first pictures that usually come to mind are a fighting, distraught couple, and a courtroom battle. While divorcing who was once your best friend may seem like the end of the world, there is much more room for positive effects beyond it.

It may be difficult to look at a bright future, but a recently-conducted study determined that 40% of divorced people surveyed became happier in their workplace after a divorce. Their work productivity and satisfaction increased. What else good can come from divorce?

Divorce is a major stressor

The fact that divorce is a major stressor for many, whether in their homes or workplaces at first, does not have to be said. Before a divorce, one or both partners can spend months going over their thoughts every single day. It can become emotionally and mentally draining and can lead up to a big decrease in their work productivity. They could react out of anger toward their children, friends, or coworkers.

The partners may be extremely concerned with their finances and confused overall as to what a divorce entails. They may be frightened about what is going to happen with their children, and how often they are going to see them if they decide to go through with the divorce. They are wondering if they’ll lose the friendships that they mutually had with others. All these effects become obvious in other areas of their lives, such as their job productivity, as it continually decreases before the divorce is even finalized. That’s not to say that for some, it doesn’t end up improving.

What are some factors that lead to divorce?

Many different stressors can drive a relationship straight to divorce. One of the main factors is stress – particularly, financial stress. Emergencies and illnesses can place a great strain on any relationship, as now the partners are left suddenly scrambling to pay medical bills on top of their mortgage and car payments. A study found that in marriages where wives were diagnosed with serious diseases like heart disease, cancer, and lung disease, divorce rates were 6% higher. The wedding vows, “in sickness and in health,” don’t always turn out how they’re intended.

Lack of intimacy, distance in the relationship, infidelity, and communication problems were just some of the other factors known to lead to divorce. However, it’s important to consider that money could be the root of all these problems. Not having enough to pay the bills, or if one partner is inappropriately misusing their funds, could lead to constant arguing and not agreeing on anything.

Per the study, divorced individuals noticed that their work performance improved after they had time to grieve. They were much happier around their coworkers and felt that their days started on the right foot each time. They were able to focus more and concentrate on their job duties instead of constantly fretting about their marriage. With the divorce now past them, their work performance improved, which led to more chances of promotions and successful career changes.

There are many more positive outcomes from a divorce that are not easy to see at that moment, but they may come to you later. For instance, newly divorced people are often stunned at the fact that they suddenly have so much more free time. They can set out to do things they have always wanted to do. Many feel that they become even better parents. Having limited time with your children means that you will have to make the most out of those moments with them. Many parents have been found to raise their game with their children and dedicate all their time fully when they’re with them.

Co-parenting is often an exhausting, seemingly never-ending game, but once all is settled and a routine is set, you may find that your relationship with your ex is much healthier this way. The household also becomes healthier, as there will be no more arguments, crying, or frustrating conversations. Your children will also be in better mindsets as they will no longer have to observe the pain that both partners were holding in.

There are several rules when it comes to divorcing your partner in Tennessee. The state is both a fault-based and a no-fault state. A fault-based divorce would require that one partner prove that the other did something to lead up to the divorce. Some grounds for a contested divorce in TN are adultery, felony conviction, fraud, abuse, abandonment, addiction to drugs or alcohol, and even sterility and impotence. With a fault-based divorce, the spouse who did the wrongdoing in the marriage will also be required to provide more financial assistance in the settlement.

A no-fault divorce does not require any kind of evidence that either spouse was violating the marriage contract in any way. They can argue that they were just incompatible, and their marriage is irreparable. These are normally grounds for divorce for couples that do not have a lot of assets and are generally not in conflict. There are other requirements in the state of Tennessee for divorce that one of our experienced lawyers can assist you with. It is important to understand these conditions before you make any serious decisions.

Divorcing who was supposed to be your lifelong partner and best friend is a life-changing event. It may leave couples feeling emotionally drained. While your attitude at work may shift afterward, the process of divorce is never easy at first. Contact one of our experienced family law attorneys today at the Law Offices of Adrian H. Altshuler & Associates. With offices in Franklin, Columbia, and Brentwood, we will walk you through every step. Call our office, or complete our contact form for a free, no-obligation consultation.